Despite a forecasted high of 8F, I got up at 4AM for the two hour drive to the White Mountains.  Some other hiker friends and I were set to meet at the trailhead at 8AM with a plan to hike the loop around Lonesome Lake.  The trail is a “lollipop” trail in that you go out, then a loop, then back down the “stick”.  This lollipop is particularly great since the around is around Lonesome Lake, and very near the shore at about the halfway point is an AMC hut.

Now it was cold enough that my phone shut off and I lost part of the trail recording, I’d guess about a third of a mile.  So my recorded total was 3.27 miles, 3 hours 23 minutes, and 1,011 feet ascended.  I did shut off recording while we were at the hut to save battery.

The area has been getting a good amount of snow.  We got a LOT of rain Thursday, but it doesn’t seem to have affected the trail.  This trail is a popular one, so it was nicely packed down.  As a result, we used our microspikes most of the time, and just a little patch after the hut in snowshoes. 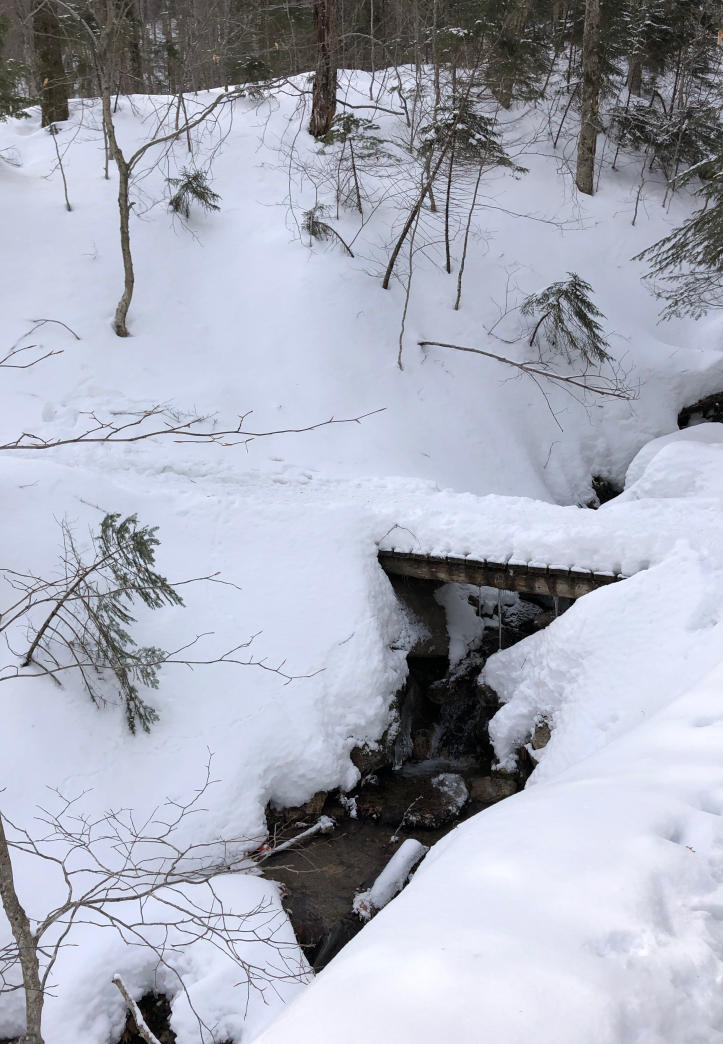 It was a winter wonderland.  Just so pretty at every step.  The trail goes over the little bridge in the above photo, and between the two trees in the middle of the next photo.

This next photo is a pic of the trail junction.  As you can see the blue blazed trail is NOT broken out.  Very glad we weren’t going that way as it would be a long, hard sludge in snowshoes.  Humorously, it looks like someone noped out after about 5 steps.

Lonesome Lake selfie!  Some folks walked across, but we chose the safer way around the lake.  The hut was a PERFECT pit stop.  The caretakers were there and had a fire going in the wood stove.  They were also selling scones and hot beverages.

While we were in the hut, one of the “croo” was making something, probably more scones.  Keep in mind, the croo work and live in these huts.  Everything there has to be hiked up.  She dropped some dough on the ground.  I wondered what she’d do.  She bent over, picked it up, and ate it.  🙂

While at the hut, we met some other ladies from the Facebook group we all met through, and possibly recruited some others! A look back across the lake before we headed back.  You can see just how big it is, by how small those people are on the other shore.

All in all, a really lovely hike, with some lovely ladies!