We last left our heroes unexpectedly at the Joe Dodge lodge, rethinking their plans after a humbling day of hiking.

Side note, before our trip I kept seeing articles about either a meteor shower or getting to see Jupiter.  However, once darkness falls it is “hiker midnight” as all that exercise makes us very sleepy.  I didn’t think I’d get to see anything in the night sky.  However, I got up in the middle of the night to pee, and happened to glance out the window on my return.  Jupiter!  Very clearly hanging out next to the moon.

So the new plan!  Was actually an old plan!  Some time ago, Right Turn and I had planned an overnight at Ethan Pond tentsite on the Appalachian Trail with a side hike up to Mt. Willey.  However, before we even left home for that trip, the forecast had some pretty gnarly thunderstorms (and lightning), so we bailed on it.  This plan was perfect for our current scenario with two days available, all of our camp gear, and not wanting anything TOO long.  (I needed a win after Friday).

We drove over to the trailhead and hiked in.  In contrast to the day before, this would be a 3-mile hike with much less elevation gain over easy terrain.  It was 3 miles, 1447 feet of elevation gain, which we completed in 2 hours and 10 minutes (much better than 3 miles in 7 hours).

We were there early and got a great spot for Right Turn’s tent and my hammock, at the end of the tentsite, so no one tromping past us.  We set up, had lunch, and promptly took a nap.  Perfect timing as the rain and wind had moved in.  We woke up, had second lunch, and chatted with thru hikers that were now arriving at the tent site and shelter.  A few camp errands and then it was time for dinner!  Hey, hikers like to eat, what can I say?  Then hiker midnight quickly approached and it was off to bed. (The water in the campsite pic looks yellow-ish due to tannins in the water, it’s not pee, I swear!).  Sunday we took our time waking up, having breakfast, and packing up camp.  Then we set off for Mt. Willey.  We had an easy first mile with a slight descent back to the junction with the Willey Range Trail.  Then it was “just” one mile to the summit.  Oops, did I mention this trail is another Terrifying 25 “elective” ?  Yeah.  It is. You can’t see them all in the photo, but there are 100 steps worth of these ladders.  Which were also damp from the previous day’s rain.  However, I have to admit, they weren’t all that terrifying.  Maybe after Friday’s nightmare, they seemed tame, but also YOU ACTUALLY HAVE A REAL PLACE TO PUT YOUR FOOT, so they weren’t that bad.  I think maybe some people just walk up them?  But I put away my poles and used both hands a feet to ascend…and tried to not think about the descent.

This hike (and the one on Friday) had a lot of moments where you get up or down however you can.  Many times that means grabbing onto a nearby tree.  It amuses me that I’ve gone from “ew, a bug” to grabbing onto trees that are black and wet and covered in some sort of black sap.  They look like they’ve just birthed an orc, but I grab onto them without any hesitation or second thought.

We made it to the summit.  The actual summit itself is this lovely rock cairn pictured above.

Luckily, there is an outlook just before the summit.  If the clouds lifted just a bit, you could see the summit of Washington in this photo.

The descent wasn’t nearly as bad as I thought it would be while going up.  I did turn around and face the ladders to descend hands and feet.  While we saw a few folks just walk down them like it was some sort of normal stair case (far braver folks than me!).

Elevation gain: 1,629 feet.  Interesting note, 3,010 feet of descent on this hike as we had hiked in (and up) the day before, then had to go down some to get to the trail, plus down the summit, then down some more to get back to the car.  My knees can tell the difference.

When we came out to the road and had prepared to drive off, we saw three AT hikers hitching.  Without even consulting each other, we offered them rides wherever they were headed.  I love the AT, I love the community, and it’s always nice to help out.

Bonus pics of a couple of blazes for the AT on the road, as a small part of the trail and this road coexist.  With my MINI on the AT! 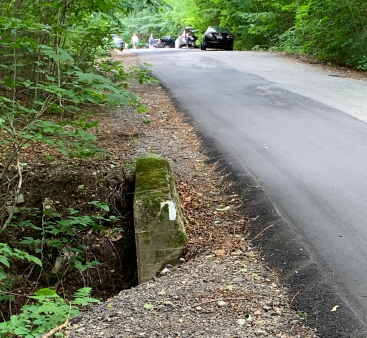 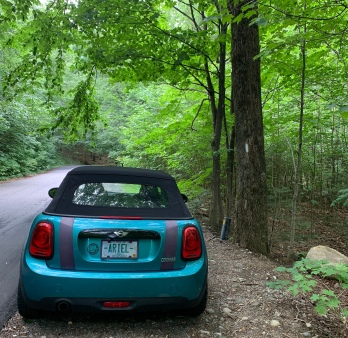