Subtitle: “The Bitch is Back”

If you read my last post, I was a little heartbroken about how I felt in the woods that day.  Happily, this hike fixed that.

Despite rain on the way there and rain on the return home, it didn’t rain at all during the hike.  It was however cloudy and overcast, which is a shame as the New Hampshire fall foliage was starting to gear up and a bright sunny day would have made for some incredible photos.

I was very excited to see there was special hiker parking.  Also I very rarely get a view from my parking spot.

Started up the road towards the trail and ran into a couple of asses. After those asses I saw, the trail goes into the woods and is flat for a minute.  Despite being a cool day in October, there were some bugs.  I was holding my collapsed trekking poles rather than using them and began to swat at the bugs with them.  OOPS.  The bottom third of one of my poles went flying.  Luckily I found it.  The trail then goes along side this horse pasture.  With this sign, but not a lot of room on the trail next to it.  I was concerned I might have another flying pole incident and electrocute myself.

The trail returns to the woods and has a very easy and not too rocky ascent.  I stopped for a moment at the viewpoint…

As I returned to the trail, I met another hiker.  We got to talking and I ended up hiking with her for most of the ascent.  She was a much faster hiker than I, but I managed to keep up.

Again, it was an overcast day so many of these foliage pics are more muted than they would have been on a better day, but it was still beautiful.  Foliage wasn’t even at peak yet and the colors were just beginning to pop.

This is a very straightforward trail, very well marked with blazes, and no other trails, twists, or dramatic turns.  Hence I was very confused when on a straight section of trail to come upon a sign that 1) indicated the direction of the parking lot and 2) was a double blaze.  One would think you only needed to know the direction of the parking lot if this was an intersection and you had just come upon this trail and weren’t sure which direction to go. As opposed to having been ON THIS TRAIL the whole time and no intersection in sight.  And a double blaze is used to indicate a turn or caution or that the trail is ended.  None of these things were true.

At the summit, and in fact on the summit cairn, someone had placed some animal skulls.

The view from the summit! One of the views on my descent…

There was one rather confusing moment on the descent, where I followed a blaze on the rocks.  Suddenly, there was no more trail.  I looked everywhere, but no trail, no further blazes.  I backed up to the blaze on the rock, yes, it was there.  Continued to same dead end spot.  Backed up TWO blazes, and saw a different blaze off to the left.  Not sure if the blaze I saw was old and the trail had been re-routed, but no harm no foul, I made my way back to the actual current trail and continued my descent. 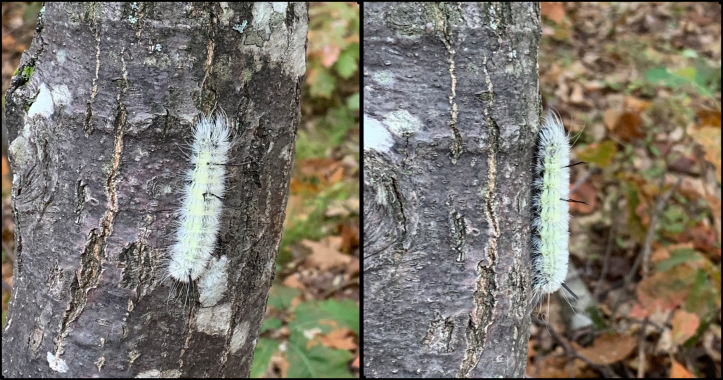 As I returned to the pasture at the start, golden hour was getting into full force, while some horses (who were huge by the way, though you can’t tell in this pic), were hanging out waiting for their instagram pics.